HOPin ACADEMY is pleased to announce the appointment of Dr. Cynthia Delores Rembert James
as our Senior Global Market and Opportunity Advisor. 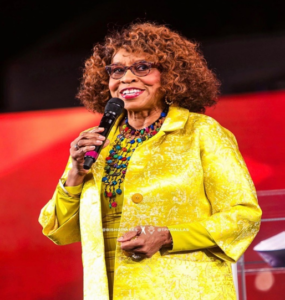 She will be responsible for connecting us to global market opportunities which will help in the company’s mission and vision as well as its growth.  HOPin Academy is the Prime Entrepreneurship Ecosystem Support Organization located in the heart of Tamale, Northern Ghana, and serving Entrepreneurs since 2014. The Academy partners with over 20 renowned corporate institutions and has successfully nurtured over 40 startups and also seen over a hundred community events effectively carried out since its inception. Dr. Cynthia James is an outstanding addition to the team and brings on board a wealth of knowledge and experiences gathered over the years. We are more than excited to have her as part of the HOPin family.

Academic Institutions attended by Dr. James include: Carnegie-Mellon University, Wesleyan University (Connecticut), Rutgers University, Pacific School of Religion, United Theological
Seminary and partial studies at John F. Kennedy Law School. She previously served in the area of
leadership development and training for an Indiana based network which included over 2,000 congregations nationally and internationally, and as Vice President for the Alameda County Training and Employment Board which offered adult and youth-oriented training programs to a region of 14 cities in Northern California. Dr. James authored one of the earliest strategic plan documents outlining best practices for employing disabled persons throughout portions of the Northern California Region.

Dr. Cynthia James has maintained an active speaking schedule and served as a guest speaker in Finland, Estonia, Canada, Turkey, numerous locations in the Caribbean and Virgin
Islands, South Africa and throughout the United States. She served for 7 years as a consultant and Vice President to a California based non-profit sending workers to 96 countries and since 2012 has
the activity focused her work toward impacting the overall well-being of individuals on behalf of building stronger families and communities.
She has held several full-time and adjunct faculty positions, at Rutgers University, The University of Pittsburgh, California State University, and two Community Colleges.

Dr. James has been the recipient of numerous awards which include Woman of the Year, (in Pittsburgh Pennsylvania), a National Science Fellowship Award, Danforth Scholar finalist, Educational Testing Service Intern, Earl Lecturer, and the coveted United States President Volunteer Action Award. She has further had her work recognized by the Family Research Council, Boston University, The University of Maryland, The California State Legislature, Volunteers of America, former members of the U.S. Senate, and the U.S. Army 3rd Brigade, 91st Division for Training Support as a civilian.
Dr. James has been married to Mr. Alvin James (former California government official, and economic and real estate development consultant) since their college days and together they have
three adult children.